Simon Carter — 12 March 2019
If your beta advises ‘taking Prusiks’, then at least find out what a Prusik is.

I can quickly bash out emails, social media posts and newsletters, but when it comes to writing an article or column for print, an alarm goes off inside my brain: “Warning, THIS IS GOING TO PRINT! Time for a bit more care and consideration, dude; you don’t want to mess this up!”

For print, I take extra care with my words and work darn hard to ensure my accompanying photos are top notch – as I’ve doing for much of this last year while working on the new edition of the Blue Mountains Climbing guidebook, which we’ve just sent to the printers.

Publishing a rock climbing guidebook is a huge responsibility. We’re lucky to have received an incredible amount of support; without the help from many different contributors, authors and editors, the guidebook would simply not exist. Nevertheless, my role as editor and publisher of the book has often kept me awake at night. 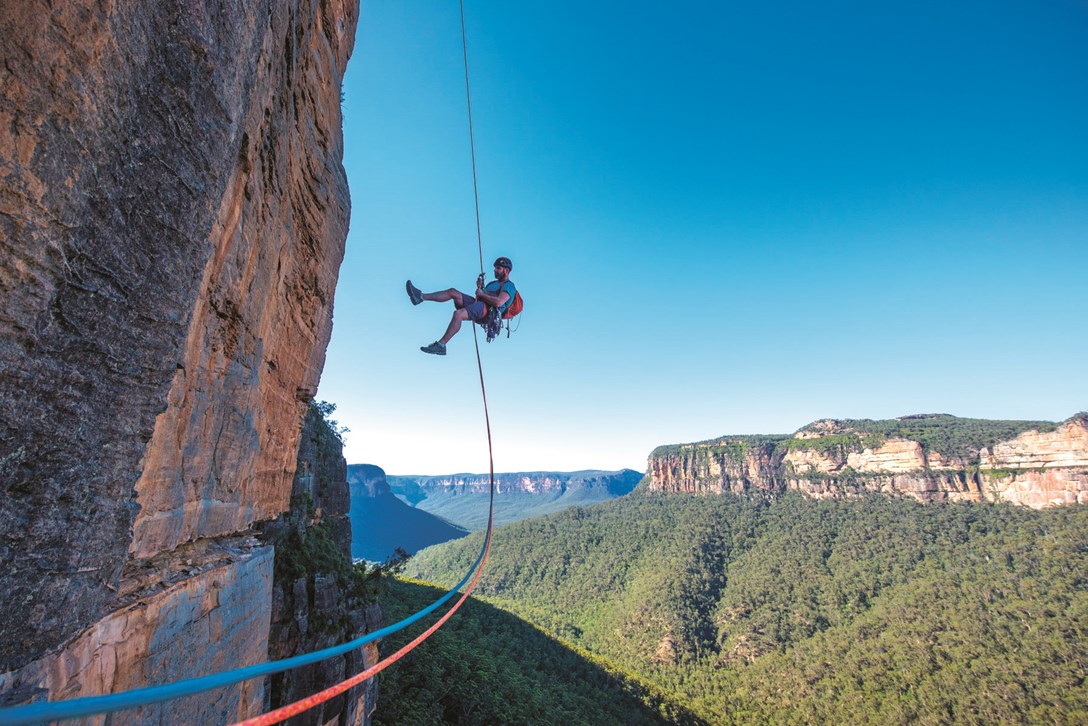 When I first became involved in publishing the guidebook, nearly 20 years ago, there was clearly a need for good information — indeed any information — about areas and routes; people seemed grateful for what we were able to work out and provide. These days I sense a growing expectation from some that every last detail and every possible hazard be spelled out, repeatedly. In many ways I’m beginning to rue the day I became involved in guidebooks. Still, we do the best we can.

We fill the book with tips for young players, yet at the end of the day it’s a guidebook and not an instructional book. An instructional book has a different purpose. Besides, the guidebook covers some 3421 routes; it’s already huge as it is. It can’t be a substitute for instruction, learning or personal experience, and it can’t (nor should it) ever replace the concept of ‘personal responsibility’ – a critical concept in climbing.

We all know what ‘personal responsibility’ means, but fully understanding the concept can be tricky. It wasn’t until 1989, when I was lying at the base of a cliff at Mount Arapiles, having just taken a seven metre ground-fall and wondering if I’d ever walk again, that the concept really began to seep in for me.

What personal responsibility is not was displayed in a recent social media video where a climber filmed themselves having trouble clipping a bolt on the fourth pitch of the ten pitch (350 metre) route Hotel California (grade 22) in the Grose Valley in the Blue Mountains. There are a couple of bolts with fixed hangers on this pitch and the climber was using a carabiner with an unusually large nose which wouldn’t fit through the hole in the hanger. They could have simply clipped the gate end of the carabiner through first, but no, filming a thirty second non-epic on this (grade 10) pitch – which lasted until the climber decided to clip the bolt with a normal size carabiner – was much more exciting. I’m all for videos and warnings showing the limitations of gear, especially non-standard gear, but when people start blaming the bolts or the guidebook for something like this (and they did) then “Houston, we have a problem”.

If you are going to abseil into the Grose Valley to attempt a ten pitch climb (let alone at night, climbing by head-torch), then is it really so hard to understand that basic ‘personally responsibility’ requires adequate preparation, the right equipment and sufficient experience? Expecting everything to be perfect and go seamlessly every time sounds like a recipe for disaster. Ignoring advice in several places in the guidebook to “take bolt plates” (just one solution to our climber’s dilemma) could hardly be considered wise. The route description also says to “take Prusiks”, yet the anonymous climber apparently didn’t take them nor even know what they are (if you fall off and end up dangling in space, they enable you to climb up the rope and hence might save your life). It’s okay to not know what they are, as default, but if a route description says “take Prusiks”, then wouldn’t any sensible person find out about them before, well, not taking them? Sure, if you know what Prusiks are and still decide to not to take them then that’s your decision. You’ll still be in a pickle if you fall off the traverse but you’ll be fully owning your decision, no doubt.

It should never be assumed that guidebooks, or any other source of information, is perfect. That is one reason why the concept of personal responsibility is so important. And it’s a reason that guidebooks have legal disclaimers at the start of them. Yet guidebooks are by far the best, most thorough, complete, trusted and responsible source of information around. Many people contribute to guidebooks and work hard to ensure they are as good as can be. The contributors know that it is ‘going to print’, and that most climbers rely on them, so extra care is taken to ensure everything is correct and complete.

In this digital age there are some online databases for Australian climbing but they effectively amount to little more than a listing of routes. There’s no one taking control, maintaining standards, taking responsibility, keeping them up to date, or doing the thousands of hours of work to fill in gaps. I don’t mind that they exist; but as a guide(book) they are just not fit for purpose and it would be irresponsible to promote them as such. The Holy Grail is to combine the high-quality curated content that exists in guidebooks with a smartphone App. We’ve been working with Sloper App to that end and some of our guidebooks are already available on that platform. Still, there is something beautiful about print and a well-designed spread. I’m sure guidebooks will be around long after I’ve passed my guidebook editor’s baton to the next mug and I’m glad about that.

Part of personal responsibility is being well informed. Wherever you get your information is up to you, but please — use it wisely.