Paddling in the Wake of a Legend

Adventurers tend to fall into two categories. There are the competitive alpha types who strive to achieve their goal, whether that’s climbing Mount Everest or cycling across Australia. Then there are the explorers, for whom it’s more about the journey than the destination; they may be deeply committed to their goal, but the adventure itself is the larger thing.

Sandy Robson is very much in the second camp. After beginning in 2011, she finished her epic paddle from Germany to Australia in 2016, landing at Saibai Island in the Torres Strait. 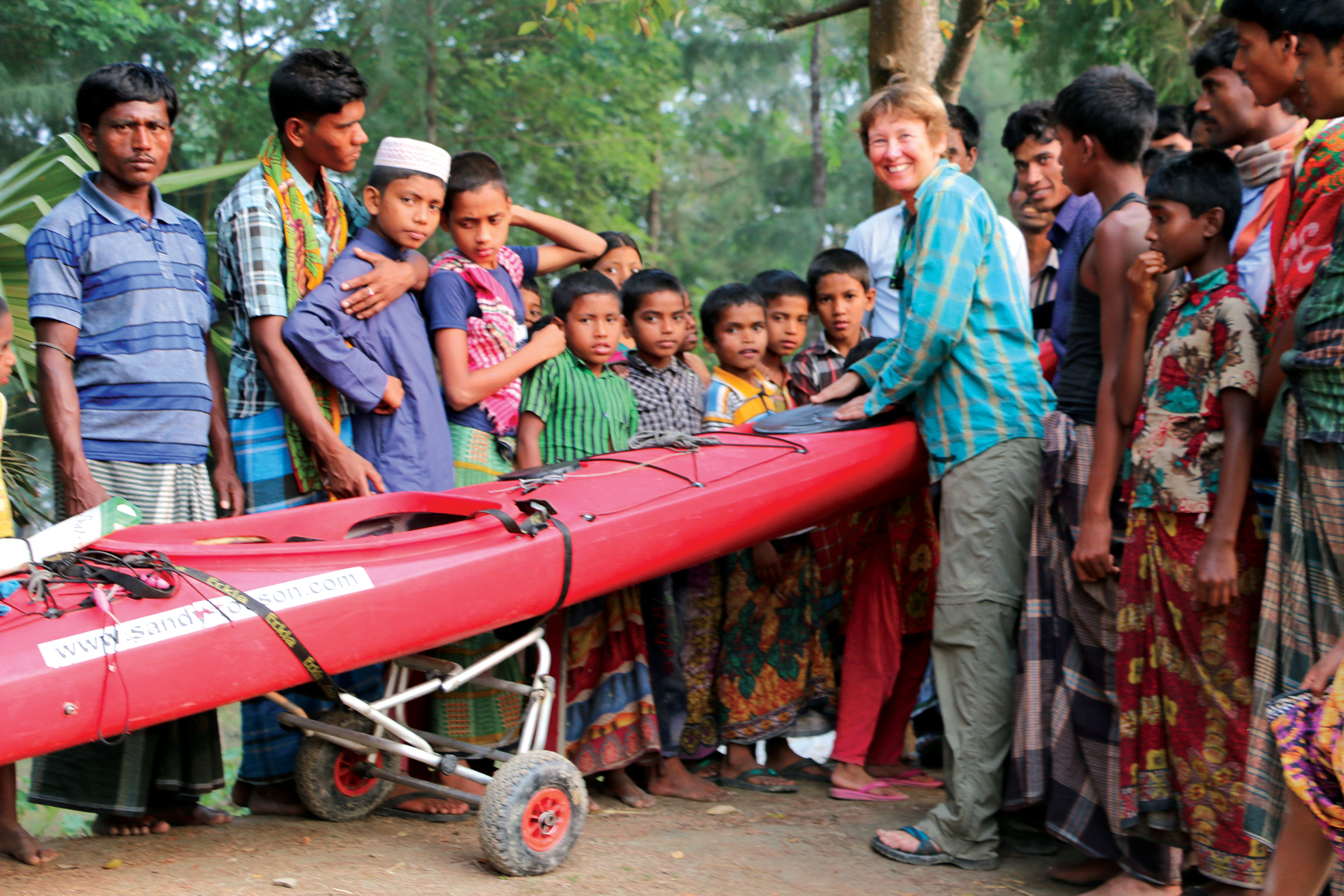 “Even at the end of paddling 23,000 kilometres across the world… I was looking along the coast of Papua New Guinea and thinking, ‘wouldn’t it be great just to keep going and not have to finish here?’” she said.

The laconic Western Australian is so laid-back in conversation it’s hard to credit her with the drive for such huge adventures. However, once talk turns to her passions – paddling, exploration, the outdoors – she becomes animated and engaged, although still fond of massive understatements. When asked why she is drawn to big adventures she enthused for five minutes about wilderness and freedom, then finished with, “I just like it. It’s my thing.”

Robson’s kayaking trip across the world is (not surprisingly) her longest to date, but she has been an explorer since way back. Robson’s first passion was long, exploratory bushwalking trips. Her days of such walks ended in 2004 when she had a hip replacement aged just 36. It was the result of hip dysplasia, a joint abnormality that runs in her family, but it didn’t stop her for long.

“I thought, if I just empty my backpack into a kayak I can still do these big, long expeditions,” she said.

“My surgeon told me that I could ride a bike or paddle a kayak as far as I wanted, but I don’t think he ever imagined how far I would paddle!”

“I just love being on expedition and the simplicity of living out of a backpack or a kayak.”

“Maybe it’s some kind of escapism, but it feels like life really hums.”

Previous expeditions include paddling 6,000 kilometres around Australia in 2007, with her trip ending because her boat was attacked by a crocodile.

The seed for Robson’s longest trip was planted in 2008 when someone at a party mentioned Oskar Speck. This little-known German adventurer completed one of the most impressive kayak journeys of all time, paddling more than 50,000 kilometres from Germany to Australia over seven years in the 1930s. Robson’s first reaction was disbelief.

“Like most people, my first thought was, ‘is that even possible? How do you do that?’” she said.

“People think that you’re crossing large expanses of ocean but the route sticks to the coast very closely.”

In 2011 she started down the Danube River to retrace as much of Speck’s trip as she could, eventually paddling through 20 countries over five and a half years. When talking about Robson’s journey, it necessarily becomes a tale of two adventures, and two adventurers.

Oskar Speck is a prime example of a subset of the explorer category I call the ‘accidental’ explorer. For this type, there is none of the planning, experience and preparation that goes into expeditions normally; instead, it’s a case of setting off and working out the details along the way.

In 1932 Speck was unemployed and living in Germany when he decided to set off in his folding river kayak for Cyprus, hoping to find work there in a copper mine. Upon reaching Cyprus he kept going – to Syria and Iran, India and Malaysia – and going – through Indonesia and Papua New Guinea, finally reaching Australian soil in September 1939. War had recently been announced; his welcoming party of three police officers at Saibai Island first congratulated and then arrested him. He spent the next six and a half years interned in Victoria as an enemy alien.

Speck was both feted and hated on his journey. He was shot at and beaten up, but also celebrated as a swashbuckling adventurer by colonial governments along the way. As Speck put it in an article in Australasian Post Magazine, “There you have the contrast which the kayak can offer to her master. At one hour you can be fighting against a head sea… you are stung by flying spray, you are in real peril. The next hour… you are sitting in one of the windows of a magnificent club. There is music and girls, and the wines of the world to choose from.”

Speck’s boat was a ‘Faltboot’, a folding kayak made of rubberised canvas over a wooden frame. These boats were not designed for use on the sea, and every wave had to be met head-on to avoid capsizing.

As Speck told it: “Take just one wave wrong and your boat will spin sideways, you will turn over and be swamped. Your first capsize on the open ocean will be your last.”

This was particularly true of Speck, who to the astonishment of Robson, could not swim.

“He paddled all that way – 50,000 kilometres across the world – and he couldn’t even swim,” Robson said.

“That explains why the route doesn’t diverge from the coast very much. He used to tie himself to the kayak with a rope when he got scared.”

LEAVING NOTHING FOR GOD

Not only can Robson swim, she also works as an outdoors educator – planning trips and sorting out logistics is a big part of her job. But even with her skills and experience, organising her Speck-inspired trip was a massive undertaking. Some of Speck’s original route was off-limits, including sections through Syria, Iran and Myanmar. The rest she paddled in five stages, with trips back to Australia for work and fundraising in between. Her longest leg was almost 13,000 kilometres from West Bengal in India to Australian shores, which took her 22 months.

Robson made the most of modern technology (there’s been one or two little advances since the 1930s), including using social media to form connections along her route. She credits ‘connectors’ with playing a crucial role on her trip, explaining that these people really love to help others and are able to use their own connections to open doors into worlds that are otherwise inaccessible.

“It gives you such an amazing faith in humanity, all the complete strangers who go out of their way to help you,” Robson said.

“When I set out from Germany I didn’t know how I was going to get through Serbia… But the Serbian paddlers knew about me coming and planned a whole lot of my journey without me even being aware of it, so it all fell into place. That happened everywhere.”

One Serbian connector, Jugo, left her with some advice she heeded for the rest of her trip.

“He looked at some of my planning and said to me, ‘Oh Sandy, you leave nothing for God.’ He taught me that you can’t plan the whole thing; you have to leave some space for those connections that you’ll make.”

Despite 80 years separating the two journeys, Robson and Speck faced many of the same challenges. Both paddlers had endless, frustrating dealings with bureaucracy, although in Speck’s day many countries were British colonies, making border crossings a bit easier. The pith helmet and khaki shorts known as ‘Bombay bloomers’ probably helped his reception too, although as the war brewed his swastika flag wouldn’t have helped.

Robson says their experience of meeting locals would have been similar.

“He (Speck) was going into very small communities where he didn’t speak the language and he was a foreigner in strange clothes and a strange boat,” she said.

“That’s exactly the same as how I did it. The only difference in some of those places is there is plastic in the sea and people have got mobile phones.”

A zipper forms another link between the two adventurers. While retracing Speck’s route, Robson was looking for someone who had actually met him. In a massive coincidence, her host for her first night in Papua New Guinea had met the German paddler during his voyage, clearly recalling the ruckus when Speck pulled up on the beach. The thing that most stuck in his memory? The stranger’s boat had a zipper, quite a thing if you’re used to dugout canoes.

Robson said: “He never found out what happened to Speck because the Second World War started… So 80 years later I was able to finish the story that had started when he was only eight years old.”

The Second World War meant Oskar’s trip ended in internment rather than fame, and his achievements were never fully recognised. He did, eventually, find the mine he’d set out for, four days after his release from detention; only, it was an opal mine in Lightning Ridge, not a copper mine in Cyprus. A few years later he was an Australian citizen and an opal dealer in Sydney. He lived in NSW until his death in 1993 aged 86.

Robson’s trip didn’t end in prison – an improvement on the German’s. She faced dangers along the way – contracting malaria (as did Speck), being run over by a fishing boat and having a run-in with pirates – but settling back into ‘real life’ has proved her biggest challenge.

“When I got back people would say to me, ‘Have you recovered yet?’ And I was like, recovered from what? I was living my life and doing exactly what I wanted to do,” she said.

“I felt like I was trying on my old life and it didn’t fit anymore. I had changed as a person – I have different values. I don’t sleep in a bed anymore, I sleep on the floor.”

Now, normal life is “quite boring. It doesn’t give me anything.”

Hearing her talk about paddling gives insight into what does give meaning to her world.

“On whale-watching boats they have this device called a hydrophone that they use to broadcast the sound of the whales. I was directly over the top of two whales and they were singing to each other and my kayak became a hydrophone somehow. The sound came up through the bottom of my kayak and it was 360 degree, quadraphonic whale song. It was absolutely mind-blowing… they came up one metre in front of me, and I was like, back up, they might breach.”

She finished with a classic Sandy understatement: “It was really cool.”

Robson is currently working on her first book, collating stories from her own and Speck’s trips. She’s also working as an outdoors instructor, including guiding paddling trips in both Indonesia and Fiji. Asked about future plans for adventure, she laughed.

“I’ve got lots of ideas but I’ve got to write this damn book first!” she said.

When it comes to writing at least, it’s most definitely about reaching the end.