Chris Ord — 4 July 2017
An Outdoor guide on how and why to start long distance trail running.

You know an adventure sport is booming when it makes the New York Times. This year, the newspaper featured first the king – Spaniard Kilian Jornet – and then the queen – Brit Lizzy Hawker – of trail running.

The articles lauded the pair for their superhuman efforts, such as Kilian’s seven hour, 14 min ascent/descent of Mt Kilimanjaro and Lizzy’s recent 319km run from Mount Everest Base Camp to Kathmandu in Nepal.

In Australia, ultra events (anything longer than a marathon) – such as the North Face 100 (NSW), the Cradle Mountain Run (Tasmania), the Tarawera (NZ) and the Routeburn Classic (NZ) – have recorded capacity fields and attracted the likes of Jornet, as well as international media attention. 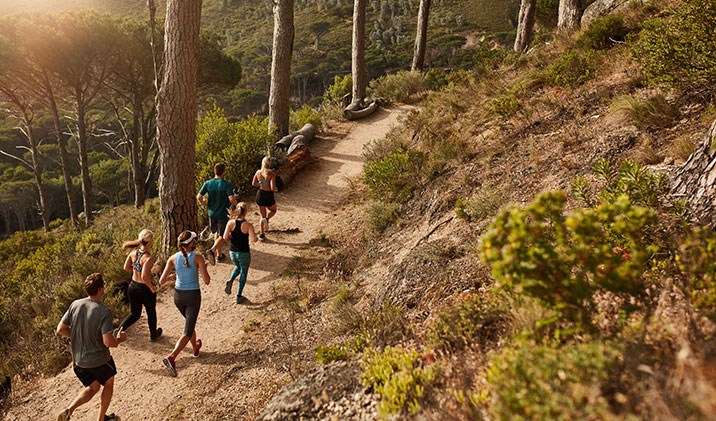 Also raising trail running’s profile are adventure-run sluggers, such as Beau Miles, who became the first person to run the 660km length of the Australian Alps Walking Track from Canberra to Walhalla, Victoria, and Richard Bowles, who ran the length of the Israel National Trail (1009km in 12 days) in April.

Now trail running is attracting a new crowd to the mountains: road runners. Recreational runners are digging feverishly into their old trekking guides in search of wilderness routes to rediscover on the hoof, sans 18kg backpack.

Shorter, less arduous events are opening up the sport to everyday runners, and those who usually pound the pavement are being tempted to hit the dirt.

The Salomon Trail Running Series in Victoria is a prime example. The annual series consists of four events, from 5km to 21km, held near Melbourne.

“Our events are specifically tailored to be achievable by the average runner,” says event director John Jacoby.

“And we’ve located them all within an hour of an urban centre, so they are accessible, too,” he says, pointing out that many trail-running events are held in the middle of nowhere.

"Which is understandable – part of trail running is about getting into these pristine environments and appreciating them on foot. But we have to provide stepping-stone events.”

In NSW, there is growing interest in Running Wild’s Trail Race Series, which covers distances from 14-20km, and the Sydney Trailrunning Series, run by events company Mountain Sports.

Further north, the Trail Running Association of Queensland backs events such as those run by Glasshouse Trail Runs, many of which have courses as short as 5-10km.

There is the Gold Coast Trail Running Series. In Western Australia, Perth has its own series outings. Tasmania’s Endorfun runs a quartet of short course events at different wilderness locations, including Bruny Island. The South Australian Road Runners Club organises social and competitive runs of varying distances, taking advantage of the Adelaide Hills and longer trails including the Yurrebilla and Heysen.

WHERE TO GO TRAIL RUNNING

The best trail running is on “single track” hiking trails because they lead into the most pristine and stunning environments. Trail running does, on occasion, encompass running on dirt roads and fire trails, and may sometimes include short stretches of road running to get from one trail to another. Essentially, however, trail running is all about running in beautiful and inspiring parts of the world that remain as Mother Nature intended: untouched and wild.

Serious trail runners are akin to marathon or ultra runners – they train hard, are supremely fit and tackle extreme distances and terrain, sometimes over multiple days.

The environment in which they challenge themselves can also be tough – it may involve high altitudes (think the Himalayas), rough routes off main trails requiring navigation skills, and gradients so steep you’d think you’d need a rope to get up and an elevator to get down.

But that’s at the extreme end. More accessible trail runs mix fun and fitness in milder terrain: winding routes between trees with gentle inclines (if any) on trails that are well-padded, smooth and clutter free. It’s what you’d call a non-technical trail. Technical trails have more clutter underfoot: rocks and roots, big drops, scrambles, scree and the like.

Those after daily exercise might prefer running on trails near suburban areas, while other trail runners spend weeks – or longer – out in the wilderness.

THE BENEFITS OF TRAIL RUNNING

Trail running involves whole body movement. You’re twisting and turning, changing direction constantly, ducking a tree branch, pushing off a rock, taking a big step, then a little one, changing pace, climbing, descending. It demands more from your body in terms of effort and number of muscles used, including core muscles.

The long-term stresses on the body are less than those experienced by road runners who maintain a similar pace and a repetitive motion. The hips, the knees, the ankles, the foot arch bang through exactly the same motion with every step, creating wear and tear on joints and muscles.

When you run trails the angles at which your feet make contact with the earth are always changing, so the impact is broadened and shared between joints and impact zones. That, combined with a strengthening of other muscles while trail running, results in less wear and tear overall.

Dirt and grass are softer than bitumen and concrete. Hence the sheer force exerted on joints is less, as the ground provides some cushioning. Again, when considered over the hundreds of thousands of foot-strikes we’re talking about, the cumulative benefit is huge.

And did we mention the view?

The key is to stay light and nimble on your feet – as though you are floating over the terrain, landing, then springing off it again.

Resist the tendency to favour one leg over the other. A lot of runners start using one leg as the “plant” leg to land heavily on and the other as the “drive” or “push-off” leg. Each leg should do these actions interchangeably.

Downhills: Run on the balls - not heels - of your feet. This means less pounding, more speed and greater control.

Uphills: Shorten your stride, keep your head up and chest forward: imagine a string pulling you upwards through the top of your head. Run relaxed and try to find a rhythm that will take you up and over each hill with relative ease. Some trail runners don’t run up severe inclines – you waste energy trying to bound up and don’t necessarily go any faster than if you power walked.

Corners: Cornering technique is akin to that used on a mountain bike. Turn your core (point your belly button) before you get into the corner and look where you want to go, ahead on the trail, past the corner (not at the corner apex). This technique is particularly useful for tight corners and hairpins. Use berms, as you would on a bike, to harness momentum.

Streams: Don’t be afraid to run right through a stream, having wet feet is part of trail running.

Obstacles: If you come across a log or rock no more than shin to knee height, don’t leap over (you may misjudge it and trip). Rather, without breaking stride, place your foot on top of the obstacle, but don’t push down with all your weight. Keep the foot contact as light as possible, so it guides you in a controlled leap over the obstacle.

Different trails throw up different obstacles. Here are a few tips for navigating them.

Forest paths: Beautiful as they are, they can also be covered with leaves that hide tripping hazards such as rocks, roots and holes. Forested areas also tend to retain moisture, so trails can be slick. Pay close attention to foot placement.

Mud: It’s fun for some, but an annoyance for others. Mud means there’s a greater chance of slipping and mud tends to stick to your shoes, making them heavy. So look closely and react. Shiny mud is invariably wet and liable to suck you in. Mud with a dull appearance is usually firmer and faster to run on.

Rocky terrain: Step lively, using a higher leg lift to avoid tripping. Concentrate hard and place feet carefully to avoid twisting your ankle. Better to slow down than to rush and roll an ankle.

Sand: Never easy to run on, especially when the sand is dry and loose. Experienced runners often flit down a sandy trail, bounding from one line to another (as opposed to running in a straight line), searching for firm footing. Look for hard-packed sand – often someone else’s footprint – or try to go for the edge of the trail.

Resistance and gym training can be good for the trail. Focus on high reps on lower weights, doing exercises that strengthen core muscles and larger muscles like your quads and hamstrings.

Developing quad and glute strength through weight training and cycling (stationary or mountain bike) will give you more uphill power and strength late in the race. Also, you’ll strengthen ligaments and muscles around your knee.

Step-ups with weights are good for trails where there are lots of big steps. Some squats and knee raises are also good for general strengthening, helping your leg control for heavy landings.

In cycle training, mimic running motion by standing up. Mountain biking is also a great way to scout out new trails.