Chris Ord — 4 July 2017
Linking up a series of Victorian High Country huts over the course of an epic week's walk.

Icon. A small word with a big weight of expectation. It denotes something of significant magnitude, of importance, of natural greatness. In the outdoors, it’s also usually attached – sometimes a little too easily – against a landscape feature or experience so grand in scale, or soul shifting in its effect on those who visit, that it engenders wildfire word-of-mouth recommendations.

Following on, it then also usually catches the attention of marketing boffins scrapping for adjectives to be writ bold on their tourism brochures. But icons were not always regarded as such. At some stage they were icons-in-the-making. And so, for our final selection in Outdoor’s Iconic Australian Adventures series, we cast our gaze towards a wild bushwalk experience that hasn’t quite registered on the icon radar, but we’re laying bets that it soon will.

You won’t find the ‘Hut to Hut’ walk on any Google search of Victorian trails. It’s not listed on the new Great Trails Victoria website, recently furnished by Tourism Victoria and containing the perceived top 15 trails of the state (both walking and riding). You won’t even find the Hut to Hut on any local brochures, and enquiries at the local Visitor Information Centre at nearby Mansfield, or even up at the trail head atop Mount Buller, will only bring you blank stares. 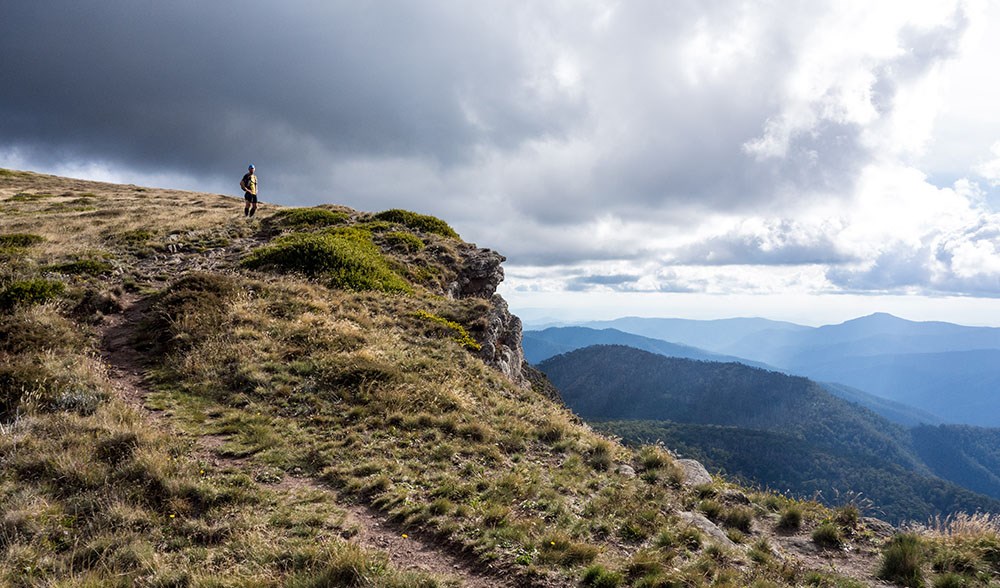 No, the Hut to Hut is a lady-in-waiting; a 100km, four- to six-day trek that we’re betting will one day register not only as a state-claimed Great Walk (surpassing even the famous Great Ocean Walk), but will be recognised as one of Australia’s Greatest Walks. Indeed, the experience of tackling this loop trail is comparable to those iconic walks found in Tasmania and even New Zealand, the latter a place where hiking from hut to hut is the norm rather than the aberration.

In a join-the-dots style route, this walk links up a string of high country huts – ideal stopping places for lunch or to set up camp – with trails in between traversing perhaps the most spectacular section of yet another icon in its own right: the Australian Alpine Walking Track (AAWT).

Perhaps the pinnacle bushwalking experience to be found on mainland Australia, the AAWT is nevertheless underused and rarely walked from end to end, given the sheer time and logistical demands of travelling its 680km length on foot. Here, then, is a perfect bite-sized chunk that can be taken in and savoured in less than a week, yet offers some of the biggest geographical highlights on the AAWT along with a rich taste of the high country hut heritage.

Of course, Victoria’s Alpine Huts are not set up specifically for walkers with rooms, bunks and kiosks, as they are in New Zealand. Rather they are basic shelters, used for cooking and emergencies, with overnighters usually opting to sleep in tents beside them. They have, however, saved many from disaster when the high country’s notoriously fickle weather turns nasty, and their role in reminding us of the early pioneering history of the Victorian Alps gives them a sense of high worth.

HISTORICAL HUTS OF THE VICTORIAN ALPS

The ramshackle buildings found along the Hut to Hut – there are eight visited en route – are intrinsically linked to the legends of Australia’s backcountry bushmen, drovers and, in later years, forestry workers, with the odd wild hermit thrown in for good measure. Low on creature comforts, they each have a story to tell hewn into the rough timber and tin constructions. Few are originals; rather they are reconstructed versions, most in the traditional style, some in a more modern geodesic dome iteration.

The most famous, Craig’s Hut, is a fully-fledged imposter whose history dates only back to being a film set for The Man From Snowy River. It is, however, the most visited hut in Australia courtesy of its silver screen fame. There is something uniquely moving about visiting the huts, especially when you have walked in to them, rather than arrived in a 4WD; the silence of your approach, the sweat you have toiled through to get there more intimately connecting visitors on foot with the history of this wild place. As Klaus Hueneke writes in Australian Geographic (#93, Jan-Mar 2009): “Mountain huts stir something quite primal in our hearts: a universal need for shelter, safety in an emergency, warmth in a cold climate, identification with a hardy, pioneering era and a desire to preserve structures and skills from the past.”

Parks Victoria Ranger, Tamara Watson, has lived in nearby Mansfield for close to 23 years and spent many years camping and exploring her mountainous backyard otherwise known as the Alpine National Park. “I would have to say the variance in terrain and the challenges that go with descending over 1000m and climbing back up again – it’s not for the faint hearted!” says Tamara when asked why she believes the route will have bushwalkers attaching the word ‘iconic’ in between deep breaths as they ascend to the Bluff. “The variety of vegetation, geology, history – both Aboriginal and European – vistas and remoteness, and its accessibility from Mansfield and Melbourne, make it worthy of the title,” says Tamara.

Indeed, before the mountain cattlemen and their huts, Aboriginal people used the King and Howqua areas as major trade routes across the Great Dividing Range. They created several quarries in the area that yielded hard greenstone – highly valued for tools and weapons. European settlement began in the 1840s, when grazing commenced, followed by the discovery of gold in the Howqua Valley in the 1860s. This marked a time of great hut building in the area, used by permanent settlers, itinerant cattlemen and, later on, backcountry skiers and walkers.

Some of the huts are named for the families of bushies who lived in them, like Lovicks, which is one of the earlier huts encountered on the Hut to Hut route. Over the years, many have been destroyed by wildfires, most recently in 2006/07, however the more popular and historically notable have been rebuilt, as with Bluff Hut, the first positioned on the high escarpment section of the route.

MAJESTIC BEAUTY IN THE VICTORIAN ALPS

It is, however, the sheer magnitude and beauty of the landscapes that steal thunder from the historical interest of the huts. From the dense bush valleys to the high plains, the flora and fauna constantly shift their metaphorical personalities, as does the ever-changing weather.

Walkers will enjoy the alpine herbfields of Mt Howitt, the Bluff and Mt McDonald, the riparian forests of Manna Gum on the valley floors along with the Mountain Gum and Snow Gum forests, which grow on more sheltered sites between 1000m and 1400m. Dropping off Mt Buller’s summit at 1805m, the Hut to Hut route uses Four Mile track to descend to the Howqua River, a favourite area for horseback travellers with trails alongside the mighty river.

It is then a heady climb up Eight Mile, to Refrigerator Gap, with the sting of a steep cliff ascent to breach the Bluff escarpment and its summit at 1725m. It is this dramatic (and hard-earned) shift from valley floor to wide-open mountaintop vistas that sticks most in ranger Tamara’s mind. “Following the Howqua River along the bridle trail, hearing the river running and watching for fish moving in the river, being surrounded by Mountain Ash and then ascending up into the Snow Gums and the alpine plains – it typifies the experience of this region,” says Tamara.

“I like to sit on the top of an escarpment and gaze over the hills and the valleys below and being where there [are] 360-degree views of mountain ranges that go on and on and on.” The never-ending vistas are the result of the trail following the ridgeline north on a rollercoaster journey across some of the state’s most memorably-named peaks, including Mts Buggery and Speculation.

“I would have to say walking from Lovicks Hut out to Mt Magdala over to Mt Howitt and the Cross Cut Saw to Mt Speculation, definitely would have to be my favourite section. It’s one of the most remote sections of the walk. You cross magic terrain, encounter wonderful vistas, twisted old Snow Gums and there are views all the way to the horizon in every direction (if it’s not raining or snowing!),” says Tamara.

From the summit of Mt Speculation, the trail diverts from the AAWT route, which continues its own journey north-east towards the state line and Canberra. Instead, the Hut to Hut ducks off north and west, making its way off the highline via a horse trail to King Hut.

The final section of the Hut to Hut weaves its way to another icon: the famous Craig’s Hut, a local landmark and a symbol of settler history which was actually never a ‘real’ hut, rather a prop for the film The Man From Snowy River. It burnt down in the 2007 bushfires and was rebuilt by popular demand. The hut offers astonishing views across the High Country ranges, including to Mt Cobbler, the so-called ‘Sleeping Indian’. Hundreds of walkers, riders, and four-wheel-drivers make the pilgrimage here every year, although very few have worked as hard as those undertaking the Hut to Hut.

Linking through undulating 4WD track, the loop finally swings back towards Mount Buller, via Mount Stirling, a bald peak that offers views back across the entire route and escarpment, making it a prime spot to reflect on a magnificent journey undertaken across the roof of Victoria.

Three more huts nearby (Geelong Grammar, Bluff Spur and Howqua Gap) give ample excuse for final rests before the final push back into the grounds of the Mount Buller Resort. Here, celebratory drinks wait at a bar looking back over the mountains traversed via Hut to Hut. It is at this point that we guarantee the word ‘icon’ will slip past your lips. Best you put a call in to the regional-tourism marketing department.