RUGGED UP IN AN olive-green knitted jersey and cradling a cup of steaming tea in his hands, Paul Harper gazed out to the ocean from the verandah of his temporary home at the Point Hicks lighthouse-keepers' cottage.

"Sometimes the ocean is so wild it looks just like somewhere in Scotland... other times it's so still and calm it feels like you're in Nice," he says, a cigarette dangling from his lips. Munching the Madeira cake he and his wife, Suzanne Davies, had kindly offered us, I was envious of his ever-changing view of this rugged stretch of coastline.

Writers Joanna Egan, Amy Russell and I - along with Bastian Hartmann - had been given the assignment to pack up our bright red Toyota RAV4 adventure vehicle and head off to Gippsland, in south-east Victoria, for three nights of bush camping and hiking in Croajingalong National Park, along the 100 km Wilderness Coast Walk. 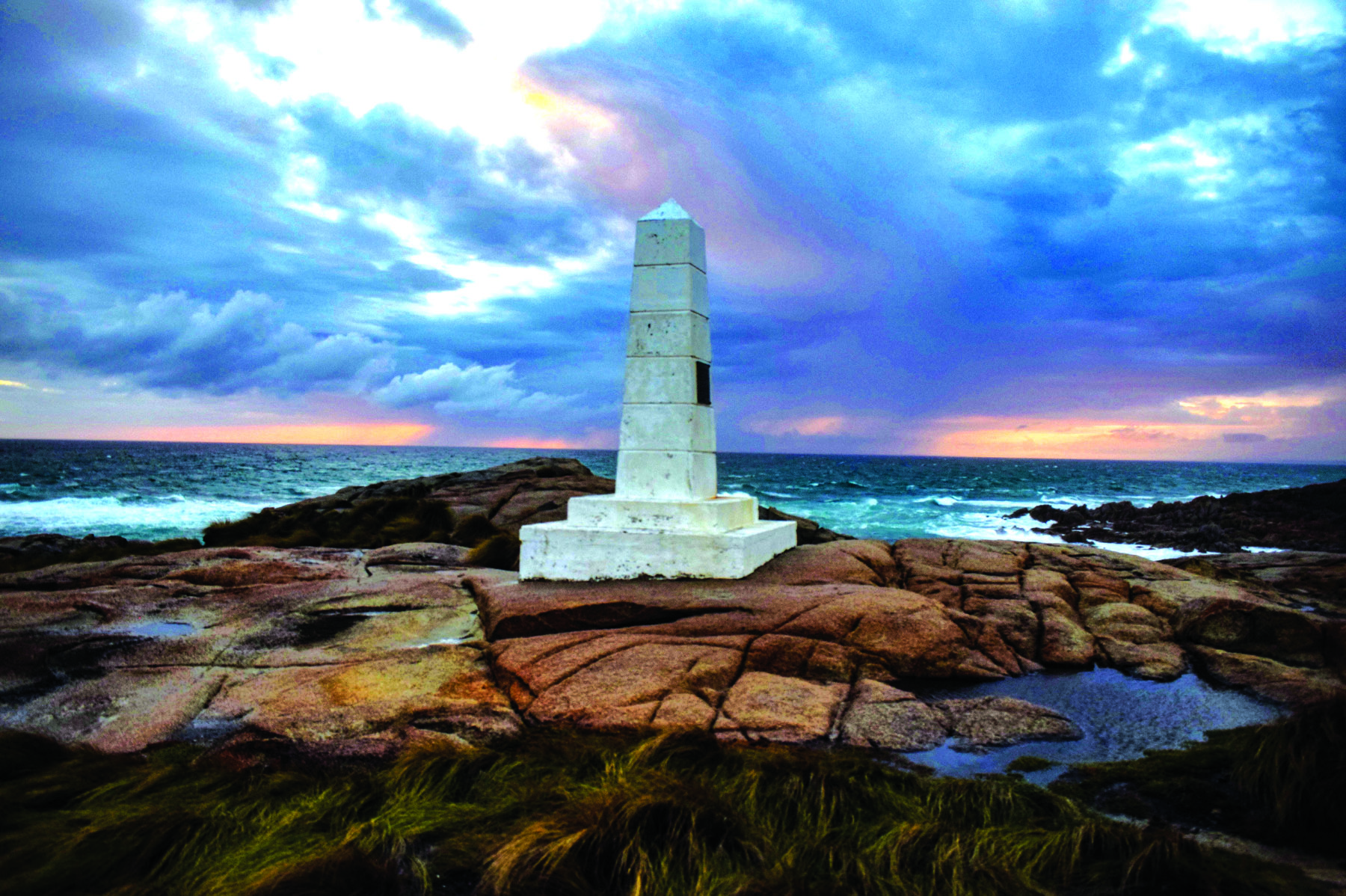 What we knew: that the track wound its way along the coast between Sydenham Inlet and Wonboyn.

What we didn't know: that it's called the 'wilderness' walk for good reason.

Just 2km up the road from the Thurra River campground - where we would spend our first night - is the Point Hicks lighthouse. Tours run at 1 pm on Thursdays, Fridays, Saturdays and Sundays and the breathtaking views from the top of this towering beacon of light offer a fantastic taste test of what's to come, as you're offered uninterrupted glimpses of the rugged coast stretching away in both directions - without any hint of civilisation.

Suzanne and Paul are just one of a handful of couples who take care of the lighthouse and its accompanying cottages. They mow, paint, play host to guests, conduct tours and offer interesting tidbits of information about the area, its history, wildlife and sights.

Point Hicks was actually named after Captain Cook's navigator Lieutenant Hicks, who called "Land ahoy" when he spotted the first glimpse of the Australian mainland. The rocky coastline didn't offer safe harbour, so the crew moved on to Botany Bay to land.

First, though, Cook gave Point Hicks its moniker after his trusty map reader and the light station was opened in 1890. Afterwards, it was renamed Cape Everade as the sextant coordinates in Cook's journal didn't match Point Hicks.

In the '70s, a canny group of high school students realised that Cook hadn't adjusted his sextant properly when he noted his coordinates. When they recalculated them, they found that they did indeed match those at Point Hicks and it was officially named Point Hicks once again.

Climbing the rustic wrought iron staircase, ever winding upwards, the tour allows you to wander past the ancient crystal lead lamp (which has now been replaced by a smaller, modern solar-powered light further down) and onto the catwalk balcony, which wraps itself around the tip of the 39.7 m lighthouse.

From here, Suzanne says, you can see the whales shepherding newborn calves back to colder waters, see the seals hanging out together on the warm, sunny rocks and spot dolphins frolicking in the waves.

If - unlike us - you choose to stay in the quaint cottages, you'd better be brave. The ghost of former lighthouse keeper Robert Grace Christoferson, who disappeared, presumed drowned, in 1947, is said to haunt the peninsula.

Guests and keepers since have heard his heavy footsteps pound the staircase. Then, there's the tale of the pesky light that won't go off even after the switch has been flicked...

But, after a chat and a warm cuppa, it was time for us to head to Thurra River and set up camp - site 18 is the pick of the bunch, according to Sue and Paul.

The Thurra River campground is nestled between the river and the beach. Apart from an older couple who whiled away the late-afternoon hours fishing, we were the only people at the site.

As darkness fell, it was just us, the swaying gum trees, the constant crashing of the ocean and the pop and crackle of our roaring fire. Oh, and Amy's squeals as she spilt her marshmallows into the dirt.

But, in true bush-camping style, she dusted them off, rethreaded them onto her stick and happily toasted away. Later, the early stirrings of a chest infection meant that my fellow campers were kept awake by a cacophony of throaty snores from yours truly. Sorry team.

The super chirpy birds ensured we were all up at dawn the next morning. We took it as our cue to hit the road and after Amy and I feasted on a breakfast of porridge, golden syrup and bananas (or "hot cardboard" according to Bastian) we were ready to hit the track.

Most of the Wilderness Coast Walk winds its way through declared wilderness area, meaning that it's been left to return to its natural state. In turn, this means that walkers have a solid job ahead of them when embarking on this trip - there are fallen trees, river crossings and some of the trail, while visible, is overgrown and it's often a bit of a treasure hunt to find signs.

Talking to one of the rangers one night - they do a great job of keeping the facilities in top shape - he said the issue was a bit controversial. Some hikers liked the wildness of the walk - bush-bashing and all - while others were calling for better maintenance and improved signage.

Track debate aside, one point was incontestable: the pristine, stunning beaches the track passes along are well worth the effort of scrub battling.

If you aren't playing Tetris by fitting your tent, stove, sleeping bag and mat and a few clean clothes into a backpack, and planning to step off the planet for the five days or so that it takes to hike the track end to end, there's plenty of day walks that can be enjoyed by driving down the dirt roads and starting from the Thurra River, Wingan Inlet or Shipwreck Cove camping grounds.

It's never boring trundling along the mostly flat coastal walk - the scenery is ever changing and the terrain offers up a smorgasbord of challenges.

The walk from Wingan Inlet - where we spent our second night (site 6 was our pick) - to Ram Head winds down along the inlet from the campground. Boardwalks prevent your boots from getting wet by the little feeder creeks that run into the tidal inlet.

Suddenly, we found ourselves on Fly Cove. At the southern end of the beach is the walk up to Little Ram Head lookout, but be prepared. When we walked it in mid-September, it was one of the sections the ranger told us was little-maintained to keep it as wild and natural as possible.

We battled through fallen trees, past deep holes dug in the track by some foraging and hard-working animal and pushed past the dead, clingy arms of banksia trees.

As the track climbed toward the lookout point, the red river gum forest provided a few less obstacles, but the track remained fairly sandy and a calf-burning push. Finally we reached a sign that gave us the option of tracking back toward Petrel Point or heading out to the lookout.

The climb up is short, but steep - a white, wooden ladder helps walkers to the top. But enjoy the view as you climb up; after a scramble to the summit, the view to the coastline is obscured by scrub.

After a slog back through the bush onto Fly Cove, the water drew Amy and I. We hadn't showered in three days. Our hair was matted to our heads, our fingernails harboured black dirt and after days sweating on the walking track, we were a little on the nose. Which made the lapping waves even more appealing - to be able to feel the cool water washing off some of the grime and crusty sweat from our skin was just too tempting to refuse.

After a hasty warning to Bastian, Amy and I stripped to our undies and ran screaming into the waves for a tub. I'm not going to lie: it was freezing. The kind of freezing where you dive under and spring back out of the water, breathless. But, we were refreshed - if not a little sandy - and just a tad less filthy.

Although the area is home to plenty of marine life, including dolphins, seals and whales, it was the bird life that really took our notice. Swooping gulls, skittish wrens, calling kookaburras and hunting sea eagles.

They happily circled overhead and the sky was filled with them flitting about. Parks Victoria say there are more than 150 species of birds who call the region home and it's not difficult to believe - their noisy calls provide the background noise, along with the crashing waves, to the Wilderness Coast Walk.

THE BEACHES OF GIPPSLAND, SOUTH-EAST VICTORIA

I love the beach. Love it. So I always try to include it in my holiday plans. But I don't think I've ever been to this many spectacular beaches. Even more so, spectacular and deserted.

My favourite beach was the one at Sealers Cove, just a 3 km hike in from our last camping spot at Shipwreck Creek (site 5 was our choice). From the campsite, it's a 500 m walk to the beach and the track to Sealers Cove picks up at the southern end of the beach.

The walk heads up into melaleuca scrub and out into heathland, which was control burned in the past 12 months. The contrast between the black and grey twisted limbs of the bush, with the lush green of the new grass and the brilliant-red, new shoots as the ominous purple clouds gathering behind them made for some spectacular scenery.

The wildflowers were out, providing a carpet of orange, yellow and pretty pinks to walk through. The track briefly follows an old four-wheel-drive road, so it was nice to be able to walk abreast and chat as we wound our way through the eucalypts.

Suddenly, there's a sharp descent and a bit of a rocky skate before you arrive at the divine Sealers Cove. A small tea-tree stained creek runs into the ocean and the cove is bordered by towering boulders, speckled and striped with earthy colours.

The waves rise and crash onto sparkly white sand and the bush sits on its haunches around the edge. We wandered happily along its short stretch of sand and decided that - if only the temperature was a few nudges higher - we could happily spend a day lazing like lizards on this beach.

Reluctantly, we headed back to camp and our last night in the bush. We were the only visitors and it was eerily quiet. There was no moon, the blackness pierced only by the beams of our head torches and the glow of our fire.

Two in our party of four had never tasted bush damper before. Excited, Jo and I grabbed the ingredients and used a Trangia saucepan to mix our dough. Instructing them to find suitable damper-cooking sticks I mixed the flour, salt and water till it was ready to be made into plump balls of goodness.

We instructed the newbies on how to cook their damper and sat around the fire, monitoring each other's progress. With our dampers in various states of blistered blackness, we poured in our golden syrup and munched happily through our warm parcels of sweet bread.

Ah, yes. This is what wilderness camping is all about.