Caffeine for Endurance Athletes: A Guide

Sam Richards — 15 November 2019
Outdoor delves into the effects of caffeine on performance in endurance events and explains how you can make the most of its benefits.

Using caffeine to improve sports performance is not new. Back in 1984, for the Los Angeles Summer Olympics, officials put a limit on how much caffeine could be present in the bloodstream of competing athletes. From that day onwards, until the ban was lifted in 2004, athletes were allowed no more than 12 micrograms of the good stuff per millilitre of urine. The World Anti-Doping Agency set a slightly higher limit of 15 micrograms.

A few years after the initiation of the ban, researchers tried to figure out how many cups of coffee that represented. They managed to have one of the participants shoot at 14 micrograms three hours after plying them with the equivalent of eight cuppas of percolated brew. Afterwards, they concluded – in my version, over the screechings of the straightjacked caffeine OD in the corner — that if someone’s urine shows 15 micrograms, “it can safely be accepted that the athlete purposely ingested large amounts of the substance”.

Cut to the modern day and our understandings of the substance have improved markedly. We now know it can’t revolutionise performance, but that it is indeed something that can help you to capitalise on your body’s latent potential. Within a competitive context, it’s benefits are widely proven and it’s known — both statistically and anecdotally — to be widely used. On a personal level, outside of the events-sphere, it can also empower you to experience the outdoors to the greatest depth possible. 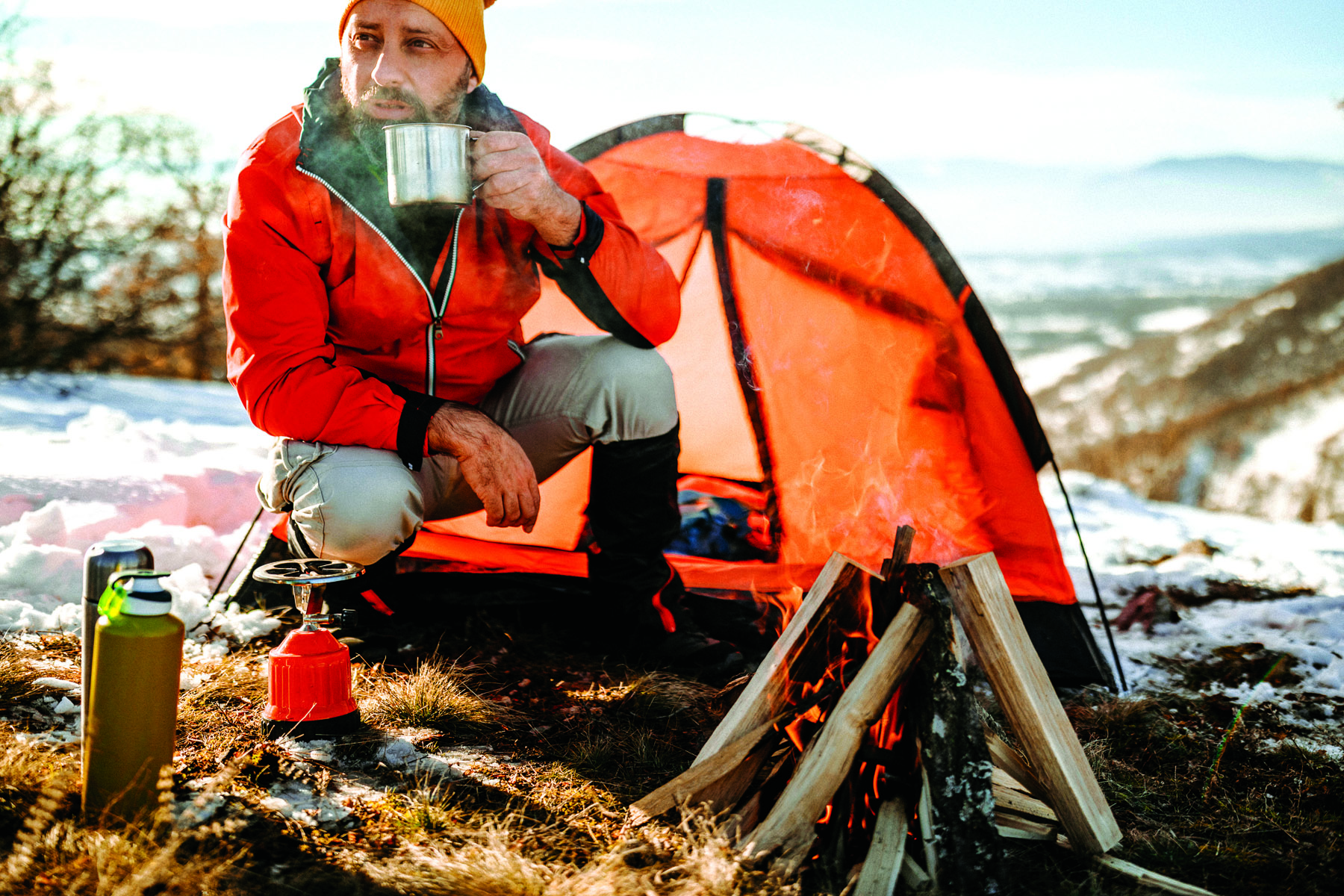 Post-consumption, caffeine enters the bloodstream and starts to take its effect, reaching peak levels one to one and a half hours after that first sweet, sweet hit. The mega-chem has a half life of about six hours; meaning that after six hours have elapsed, only half of it will still be working its magic on you, then six hours after that, only half again.

Coffee changes how the body operates in various ways, many of which enhance performance. The benefit which desk-job warriors are most familiar with is cognitive; caffeine stimulates the central nervous system, thereby improving focus and alertness, and reducing fatigue.

How can it work such wonders? Because of its structural similarity to adenosine, a chemical that, when it binds with adenosine receptors, makes you tired. In an act of neurological seat-stealing, caffeine attaches to the receptors itself, blocking adenosine absorption and staving off fatigue.

Similarly caffeine prevents dopamine re-absorption, thereby keeping dopamine, one of our feel-good hormones, active. Dopamine not only feels good (it’s one of the reasons there’s eight hole-punched loyalty cards in your wallet), it also increases motivation; as its levels rise, you start to want and not want things more strongly, and as it depletes, you say, meh.

Add to this that caffeine has been linked with reduced perception of muscular pain during and after exercise, and that it can reduce perception of effort, and you have one killer concoction.

The performance benefits are not merely enacted through psychology; they also come to fruit through physical means. Caffeine increases the amount of adrenaline in the bloodstream, which then increases your heart's BPM and the intensity of these beats, until its doof doof doof like the nightclub down the street. In so doing it increases blood pressure, which, working hand in hand with caffeine’s ability to dilate air passages, ahhhhnables increased respiration. That surge of oxygen directs to key muscle groups, such as your vigorously pumping chicken legs.

Furthermore, caffeine improves the body’s ability to use fat as a source of energy. This is incidentally why it is quite popular as a weight loss tool, along with the fact that it increases heat production (aka ‘thermogenesis’) and thereby boosts metabolism speed. This thermogenic property is why a hot cuppa is so brilliant in cold climes, say, in the tent while a 160kph Brett-Leesque gale whips the nylon fly into a ducking frenzy. The coffee is warming more than your lips and burning more than your tongue.

Using fat-as-energy helps in endurance performance, by allowing the body to use fat instead of glycogen, thereby keeping glycogen levels up. Running out of glycogen is the all-too-familiar point of hitting the wall. By opening fat up to business, caffeine increases your pool of potential energy. It also does this by increasing the rate of glucose absorption in the intestine — yuck.

WHAT IT CAN DO FOR YOU

Reading the above, it’d be easy to assume caffeine could transform you from a beginner struggling to lap the block in your newly acquired Nike headband and sweatpants, to a hardened ultra-running guru who literally runs for breakfast.

In reality, the performance enhancements are small-scale; some review studies, which collate the forebodings of scattered research papers, say caffeine has the ability to improve endurance performance by around 3 per cent. Sounds teency, but if you extrapolate that to a 12 hour ultra-run, that could mean crossing the finish line 20 minutes sooner than the doofus on decaf.

More importantly than performance though, is the potential to improve your experiences when out in the great outdoors in your own time. The best panorama of your jog among scarred gums, spring thunderheads and fading waves of mountains could be up the next crest, the one you couldn’t quite scale without your large latte with one.

HOW TO HARNESS CAFFEINE TO FULL EFFECT

Outdoor caught up with Advanced Sports Dietitian and President of Sports Dietitians Australia, Simone Austin, to find out how to make the most of caffeine to enhance your performance out on the tracks.

Crushing baristas around the country in one swift blow, Simone explained that it’s best to know exactly how much caffeine you are consuming.

“The amount of caffeine in coffee can vary greatly,” she said. “Desbrow et al (2007) found just how extreme the variations can be.”

The study in reference found, based on analysis of samples from around Australia, that the amount of caffeine per serve in store-bought espressos ranged from 25 to 214mg!

“It’s best to take caffeine in tablet-form,” Austin continued. “That way, you get a known dose and can calculate how much you are having accurately. Alternatively, you can take caffeine as caffeine strips. For example, Revvies Energy Strips.

“When it comes to gaining a sporting performance improvement, you only need a relatively small dose for maximum benefit. You need 3 milligrams per kilogram of body weight. There’s no benefit over this dose, as found by Desbrow in 2012.

“What that equates to, on average, is about two cups of coffee or 600mL of an energy drink. Keep in mind that energy drinks can cause stomach upset, have unwanted ingredients and may come with high sugar or artificial sweeteners.”

Austin says that you are best off consuming caffeine one hour prior to exercise; however, she added that studies have also shown small doses of cola drinks near the end of endurance events can enhance performance (Cox et al 2002).

Caffeine, of course, is not the whole picture — and may in fact have some unwanted effects on performance.

“If you have too much, it can cause rapid heart rate, cause gastric distress and interfere with sleep, which is important for recovery,” Austin said.

Austin’s book, Eat Like an Athlete, gives a broader picture of ideal diet for maximum performance.